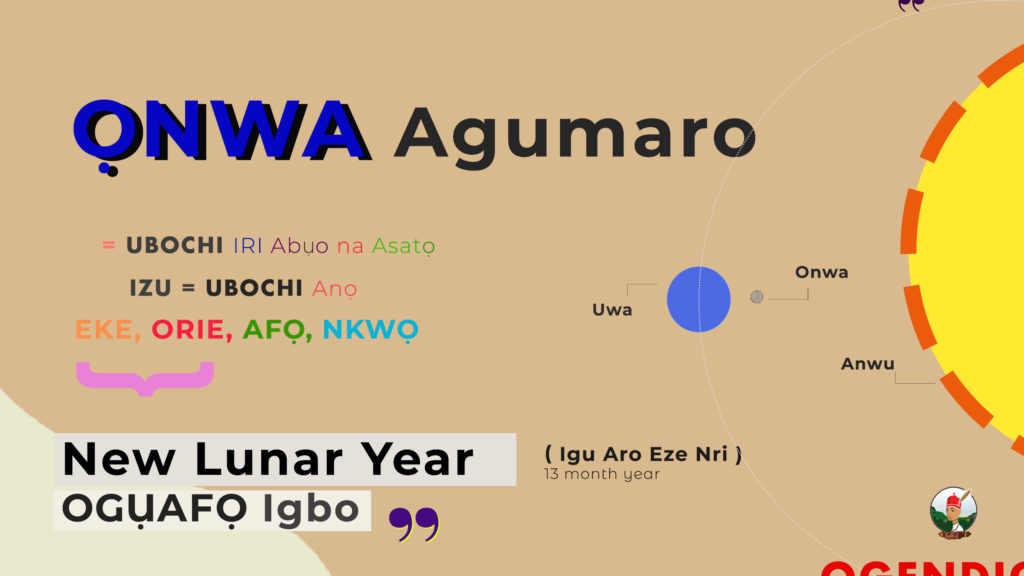 Ògụ́gụ́ àfọ̀ Ị̀gbò simply means “reading of the year” (forecast) in Igbo. The traditional calendar has 13 months, in which there are 7 weeks and a 4 market day system, plus an extra day added at the last month of the year. So 13 lunar months with 28 days.

The Igbo Lunar Calendar begins roughly around the third week of February; the second month of the Gregorian calendar. Lunar calendars are based on cycles of the moon phase. The traditional timekeepers in Igboland are the priests or Dibia.

Ọnwa means moon in Igbo, this is the name of the cycle of a month.
Izu means week and there are seven Igbo weeks also known as Izu Asaa.
Ubochi means day and there are four market days named Eke, Orie, Afọ, Nkwọ.
The days correspond with the four cardinal points, Afọ; north, Nkwọ; south, Eke; east, and Orie to west.

Children can be named after the market day they were born on, for example, Mgbeke ( Agbogho means female child [born] on the day of Eke Market etc ), Mgborie, Mgbankwo, Mgbafo.
For male children, Oko (Okorie means male child) Okonkwo, Okorie, Okeke, Okafo. Nwa (means child in Igbo) and these names can be unisex; Nwaafo, Nwaeke Nwankwo and Nwaorie.